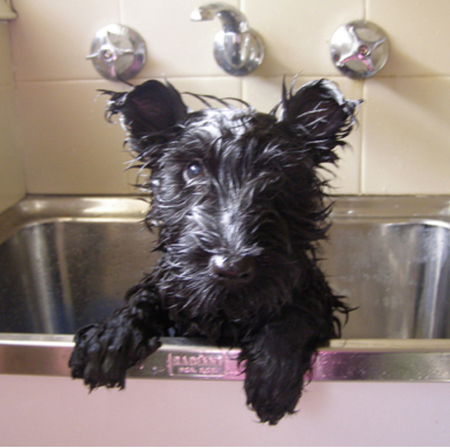 One thing we didn’t count on with Waldo is how often he has to be groomed. He has hair, not fur, and it grows like it’s been fertilized. Also he smells. It’s a generalized dog smell plus something particular to Waldo related to what he rolls in/digs up. We’re too lazy to give him a bath between grooming appointments so by the time six weeks have rolled around we love him only with arms outstretched.

We’re also too lazy to take him somewhere so the groomer comes to us in a cool van outfitted with everything she needs to torture Waldo. As soon as he sees her pull into the driveway he runs into his bed and buries his head under a bunch of chew toys. It’s like a toddler who puts his hands over his eyes and thinks you can’t see him.

I pick him up, hand him over to Kayla and he looks at me with the saddest eyes imaginable. Guilt washes over me. But I get over it as soon as the screen door slams because that smell is finally going away.

After she’s done, I pick him up and there is intense face licking and looking back at Kayla and the van in horror. When I put him down he beelines for the bed again until he hears the van leave, then joyously runs around the house shaking his head to get the clean cooties out.

I always take him for a walk right after the grooming to further alleviate the trauma. He makes sure to dig a monster hole each time, covering himself with dirt, leaves and bad smell. He knows exactly how to punish me.