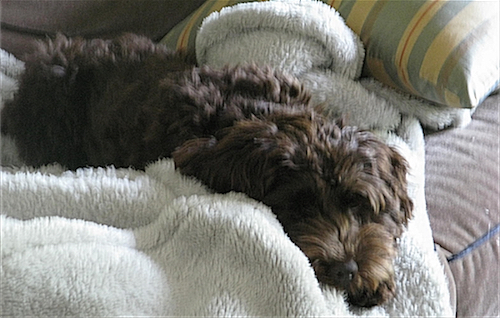 Our 2 year old Labradoodle Waldo, AKA The Dog Most Likely To Be Reincarnated As A Dinner Gong, used to be for sale on our old website. Value-priced at $1,000,000, we didn't have any takers, maybe because he requires a specialist-prescribed hypoallergenic kangaroo diet due to itching, which we first thought was fleas. Those came later.  Kangaroo was pretty much the last option after trying duck, salmon, turkey, venison and woolly mammoth. Have you tasted Kangaroo jerky? We're saving some for the apocalypse because from a consistency standpoint it will survive a nuclear bomb.

We decided not to sell Waldo on this site because we have grown attached to him. Also we’re now very best friends with our vet whose new swimming pool, suspiciously put in since we became clients, we enjoy weekly. But some of our customers have also become attached to him so we thought we’d keep you up to date on his life, a riveting non-stop action adventure that includes eating, lying on the couch and torturing gophers in the orchard. Fasten your seat belts.